This article is written by Timo van Boekel and his vision about hybrid zoos:

“There has been a lot of discussion about the idea for a rollercoaster at Wildlands Adventure Zoo Emmen in the Netherlands lately. The main subject in this discussion was about the use of attractions within an environment with living animals. However, the combination between animals and attractions is already well known in the zoo industry, for example at Bush Gardens (USA), SeaWorld (USA) and Bellewearde (BE). Next to these obvious ‘hybrid zoos’, as ATPM-lecturer Goof Lukken names them, the use of attractions, like transportation systems, is more widely used. However, the question should not be if it fits within a zoo, but if it contributes to the story and experience.

In most cases it does, for example the bus safari ride at Safaripark Beekse Bergen (NL) and Wildlands itself. Rangers educate guests about the animals within the ride and the system provides new perspectives for the guests. In addition, it does not seem to influence the behavior of the animals much since there is enough space to avoid the transportation systems. The only experience disadvantage that occurs is the visibility of other guests who are enjoying the ‘walking’ safari. Scott Lukas (2013) calls this ‘cross viewing’ in his book The Immersive Worlds Handbook. Avoidance of cross viewing creates a better experience and level of immersion within the experience. Subsequently, a higher level of immersion could create a higher level of escapism (Pine & Gilmore, 1999). In that case the guest would feel even more on a real Safari in Africa within the ride. 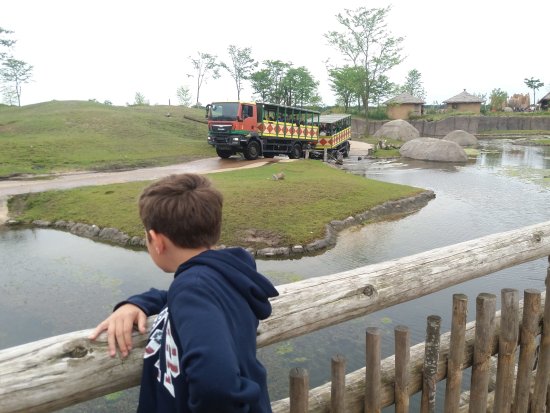 Another example is the Manta rollercoaster at SeaWorld Orlando (USA). The hybrid zoo chose to incorporate a new rollercoaster in their attractions offering. More specifically they chose a Flying Coaster by Bolliger & Mabillard. Concept wise the idea was to incorporate sting-ray’s in the story of the coaster. As known, sting-rays are seen as the birds of the sea because of their movement through the ocean. The flying part of the coaster gives guests the feeling that they move around like a sting-ray. In addition, the queue consists of aquariums with 60 different species of animals and provides guests education. Even those who do not want to ride the coaster could see the aquariums. The trains are decorated to look like a manta ray as much as possible and the coaster is painted in blue colors to mimic the ocean. All these aspects lead to an attraction that is completely immersive and reflects the story of the sting-ray. Therefore, the attraction contributes to the exhibition of the animal instead of neglecting it.

Although the previous examples are a contribution to the storytelling and the experience around the animals, not all currently used rides are. The monorail rides for example in Chester Zoo (UK) and Ouwehands Dierenpark (NL). Monorails are almost always elevated and, therefore, give a view from above on the animals and its environment. Zoo designer Erik van Vliet argues the top-view perspective: ‘Offering a top down only perspective is not suited for animal viewing experiences, they create an uninterrupted top viewing over long areas and expose all barriers.’ (Exhibiting Zoo Animals, 2015). Chester Zoo and Ouwehands Dierenpark both try to provide a unique experience and build natural-based enclosures to tell the educational story about the animals. However, the whole natural-based enclosure concept is negatively influenced by a monorail going over it. The whole illusion of a wide, un-fenced enclosure is ripped apart when the backstage area and indoor enclosures are seen from above. To summarize, the use of rides for storytelling is not wrong, but it needs to have the right perspective for the experience that is intended to offer.

This could become a pitfall for the rollercoaster at Wildlands Adventure Zoo Emmen. The concept of the zoo is to make a journey around the world in only one day. It could be a risk for the concept when a rollercoaster is added to it. All possible backstage areas, buildings and separations could be seen when the rollercoaster goes up on the lift hill chain. This creates an experience gap as the guest will see that the whole world they have seen until that point was artificial. In addition, when guests see the city of Emmen in their coaster car they are disconnected from their immersion of the journey. Next to that, the rollercoaster should contribute to the story of the animals or the environment to fit in the immersive experience. To conclude, it will be interesting to see how Wildlands is going to integrate the rollercoaster in the current experience. As could be seen in this article, it is not the question if there should be a rollercoaster but how they will utilize it. This requires decent considerations and a well-thought process.”

Our website is currently undergoing redesign. Some pages might not work as expected. We are working to get everything fully up and running again asap :-)